The Re-Spin Feature in Online Slots 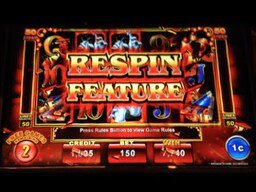 Players who want to get the most out of online slots or Microgaming often state that playing through rounds quickly is the best way to do so. With the use of the re-spin feature, players can spin a single reel once more in order to maximize their odds of winning a jackpots.

The first thing a player must do is find an online slots provider that offers the re-spin feature. Many of the most prominent branded slot have this, but Microgaming slots are the most popular. Retro Reels and Reel Gems are two machines that provide the re-spin feature as well as the option to stake all of the current winnings on a single bonus game. Next, players need to decide how much money to wager per payline and how many paylines upon which to bet. The total amount of the wager per spin can be determined by considering the denomination of the coin, the number of coins per line, and the number of paylines wagered upon.

The re-spin feature in many options of slots is very handy when a player misses a large payout or the opportunity to participate in a side game by a mere reel. When this happens, players can opt to use the re-spin feature to spin that single reel one more time. Sometimes, re-spins are given to players sparingly at the start of a gaming session; other times, these re-spins must be earned by matching certain symbols or by completing certain mini-games along the way. In very rare cases, online casinos assign a value to their re-spin feature and players must actually pay for that function before it can be used.

When playing slots online casinos , everyone experiences that moment when they miss a jackpot by one or two symbols on a single reel. With the re-spin feature, players get one more shot to make their dreams a reality.